Company arrived yesterday!!
Well, new neighbours at least! But I’ll get to that!

The mornings are definitely chilly here and the afternoons are gloriously warm and sunshiny- at least Friday was simply wonderful!

We decided to try this green floating thing again- it’s getting to be a habit for mom and dad, but that may change for the weekend!
And we came across the most delicious smelling floating food, err, ducks ( mergansers to be specific). Again, mom has to get those photos off her other camera so I’ll update this later with some shots!
At any rate, as much as I wanted to go get me one, mom would not let me :-< Later on though, the next level of fun began after K&B got here!! I LOVE the back of the minivan- I just walked right up and settled in while mom and K chatted! 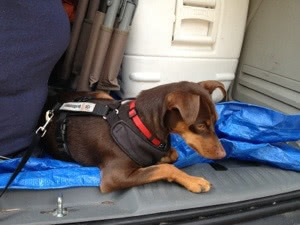 There was much carousing after supper as well, but mom won’t let me post those photos … I was cozy in my JALE and quite happy to be in a safe place while they played this year’s first game of Munchkin!

And today is another day! Cold morning so I am staying in my bed as long as I can!